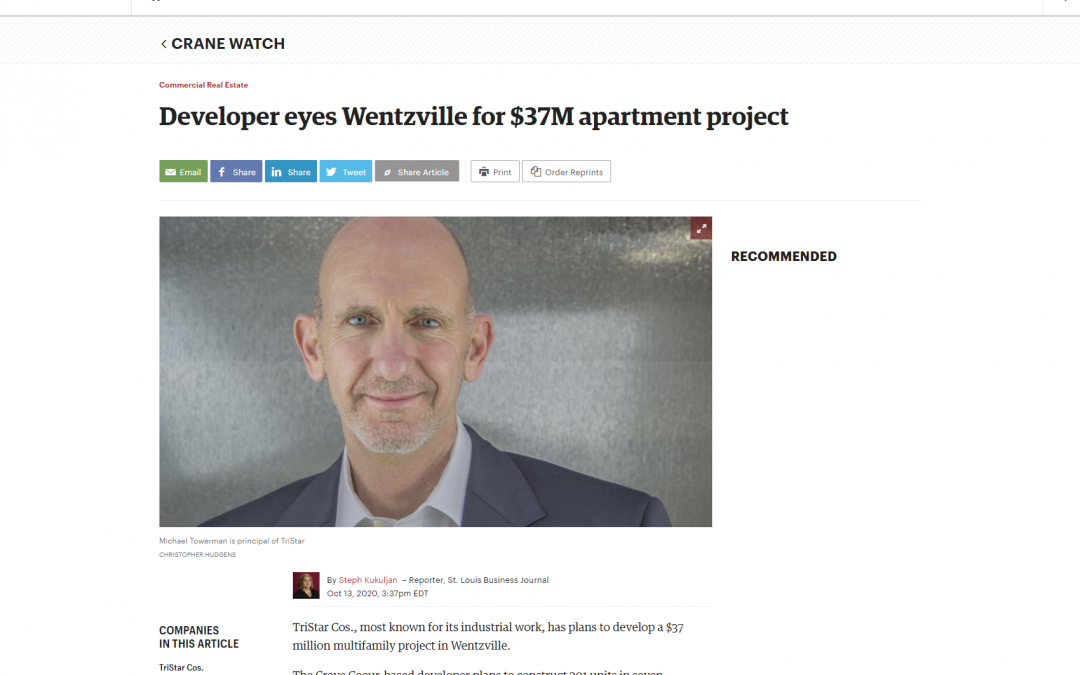 TriStar Cos., most known for its industrial work, has plans to develop a $37 million multifamily project in Wentzville.

The Creve Coeur-based developer plans to construct 201 units in seven buildings at 10 Cox Lane, off main thoroughfare Wentzville Parkway and across the street from Heartland Park and Holt High School. The site also is near retail center Wentzville Crossroads and SSM Health St. Joseph Hospital, a major employer for the area.

TriStar founder and Principal Mike Towerman said the project, called Heartland View, will be near the city of Wentzville’s new recreation center that’s slated to open in 2022.

“It was competitive to get the property,” Towerman said.

TriStar is widely known for its industrial developments, such as World Wide Technology’s $115 million Metro East campus, Amazon’s warehouse at the Gateway Commerce Center and the new Mid America Commerce Center in St. Clair County. But it has done multifamily in the past. It was the developer behind the 254-unit Alinea at Town & Country, which it sold for $58 million in 2017, as well as Bramblett Hills, a 204-unit development in O’Fallon, Missouri.

TriStar liked the market conditions with the Heartland View deal: Wentzville is one of the fastest growing cities in Missouri and the multifamily market “has been on a run since 2014,” he said.

“I’ve never seen anything like it, and demand doesn’t seem to be letting up,” he said.

St. Charles County multifamily occupancy dipped slightly year over year from 97.1% to 96.1%, though it still outpaces the region’s average of 94.9%, according to Berkadia research.

TriStar has not yet selected a general contractor but the company is using Barnett Design Studio in Nashville as the architect. Towerman expects construction to start in the spring, with the first building delivered in the first quarter of 2022.